Geneva. 15 June 2021. Major health groups have joined forces to combat a largely ignored but preventable heart disease that affects more than 39 million people worldwide – as many or more than the number of people living with HIV AIDS — and claims more than 290,000 lives each year. In Africa, Colours to Save Hearts aims to increase awareness among 60,000 children, their families, and teachers about the symptoms that require further testing to rule out infection from streptococcal bacteria.

Rheumatic Heart Disease (RHD) often strikes those under 25 years of age and most patients do not reach their 40th birthday, while often experiencing prolonged disability. The programme of work includes the distribution of colouring books and crayons in 20 schools to children aged 6-13 years to help them learn about RHD. In addition to sensitizing children and their parents to the symptoms and seriousness of the disease, digital stethoscopes, portable ultrasound scanners, and penicillin and antibiotics will be distributed throughout implementation to allow for consistent testing, diagnosis, and treatment.

While addressing immediate needs of the disease, crucial efforts will also target longer-term training, assessment of cases including those needing urgent care and follow-up. Two annual screening campaigns will train around 600 teachers to administer “Strep A” tests to 2,000 children. Health professionals will also be trained on screening, early detection and monitoring of symptoms and on using medical equipment. WHF will allocate a portion of funds raised for surgeries to repair or replace damaged heart valves in patients.

“Innovative in scope and mission, Colours to Save Hearts brings together partners in health, research, and government, from developed countries and beyond, and connects us in the fight to spread awareness about Rheumatic Heart Disease in Africa. Children learn through the colouring books and crayons and teachers and medical staff are equipped to detect and monitor symptoms,” said Jean-Luc Eiselé, Chief Executive Officer at WHF.

RHD takes an economic toll as it affects children and young adults in their most productive years. Seemingly common symptoms such as fever, sore throat, painful joints and fatigue go unnoticed, often leading to complications in later years. The disease develops as a result of Rheumatic Fever, an autoimmune reaction to infection with streptococcal bacteria causing what is commonly called “strep throat.” Left untreated, RHD can inflame and scar heart valves and heart muscle. Colours to Save Hearts was developed by the World Heart Federation (WHF) with technical and funding support from diverse partners: The Heart Fund, Direct Relief, Instituto Nacional de Saúde (INS), the Mozambique Institute for Health, Education and Research (MIHER), the State of Geneva, Foundation Le Petit Coeur, and Edwards Lifesciences Foundation. The partnership is being implemented in Mozambique which has an estimated 3 per cent disease incidence, one of the highest rates among school-aged children in sub-Saharan Africa.

“Colours to Save Hearts comes at a time when the world’s focus on health is heightened by the COVID-19 pandemic. Underlying conditions such as rheumatic heart disease can increase a person’s risk of health complications if infected. Through increased awareness, improved access to treatment, and investment in affordable care, we can make RHD a disease of the past—everywhere”, said Ana Mocumbi, Head of the Non-Communicable Diseases Division at Mozambique’s National Health Institute. 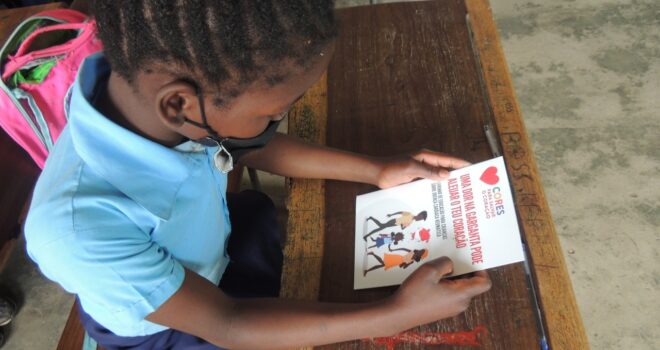