By increasing awareness of uncommon and neglected conditions, we can help to ensure better diagnosis rates and heart health equity … because every heartbeat matters.

While each individual disease is rare, collectively rare diseases are common, affecting approximately 5% of the world’s population. There are more than 6,000 known rare diseases, some of which affect the heart and circulatory system.

80% of rare diseases are genetic in origin and often present at an early age. Patients with rare diseases also suffer from delays in diagnosis due to a lack of medical knowledge and poor awareness of these conditions, which contributes to a considerable social and financial burden for affected individuals as well as their families and caregivers.

One of these is called transthyretin amyloid cardiomyopathy or ATTR-CM, which is a form of cardiac amyloidosis. ATTR-CM is a rare, underdiagnosed and fatal condition, resulting in progressive heart failure. It mainly affects men over age 60 but can also affect women. Another is Kawasaki Disease, which is actually becoming increasingly common and is the leading cause of acquired heart disease in children.

There are also conditions related to the heart which inflict great health burdens on those living in low- and middle-income countries. Chagas disease is a neglected tropical disease caused by a group of parasites called Trypanosoma cruzi. First discovered more than 100 years ago, the disease continues to affect more than seven million people worldwide and is one of the most prevalent public health problems in Latin America. If left untreated, Chagas can cause irreversible damage to the heart and other vital organs.

Rheumatic heart disease (RHD) is a condition which affects 39 million people worldwide. Every year, the disease claims 291,000 lives, mostly in low- and middle-income countries. RHD most commonly occurs in childhood and can lead to death or life-long disability. 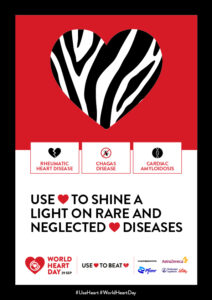 +1 BILLION people around the world have #hypertension. Fewer than 1 in 5 have it under control. Reducing the am… https://t.co/CaSoAo2n1b

Register for free on #EHACampus and listen to the #HeartFailure 💔 podcast with Prof Gunnar Birgegård (… https://t.co/m67jq9Spon

#AirPollution is one of the most important risk factors for #CVD 💔. We congratulate the new 🇩🇪 government for makin… https://t.co/jCj6hjJ6HL

RT @IFPMA: People with #HeartDisease are an important at-risk group for the flu (as we discuss in our article⬇️), so we encourage #HCPs to…