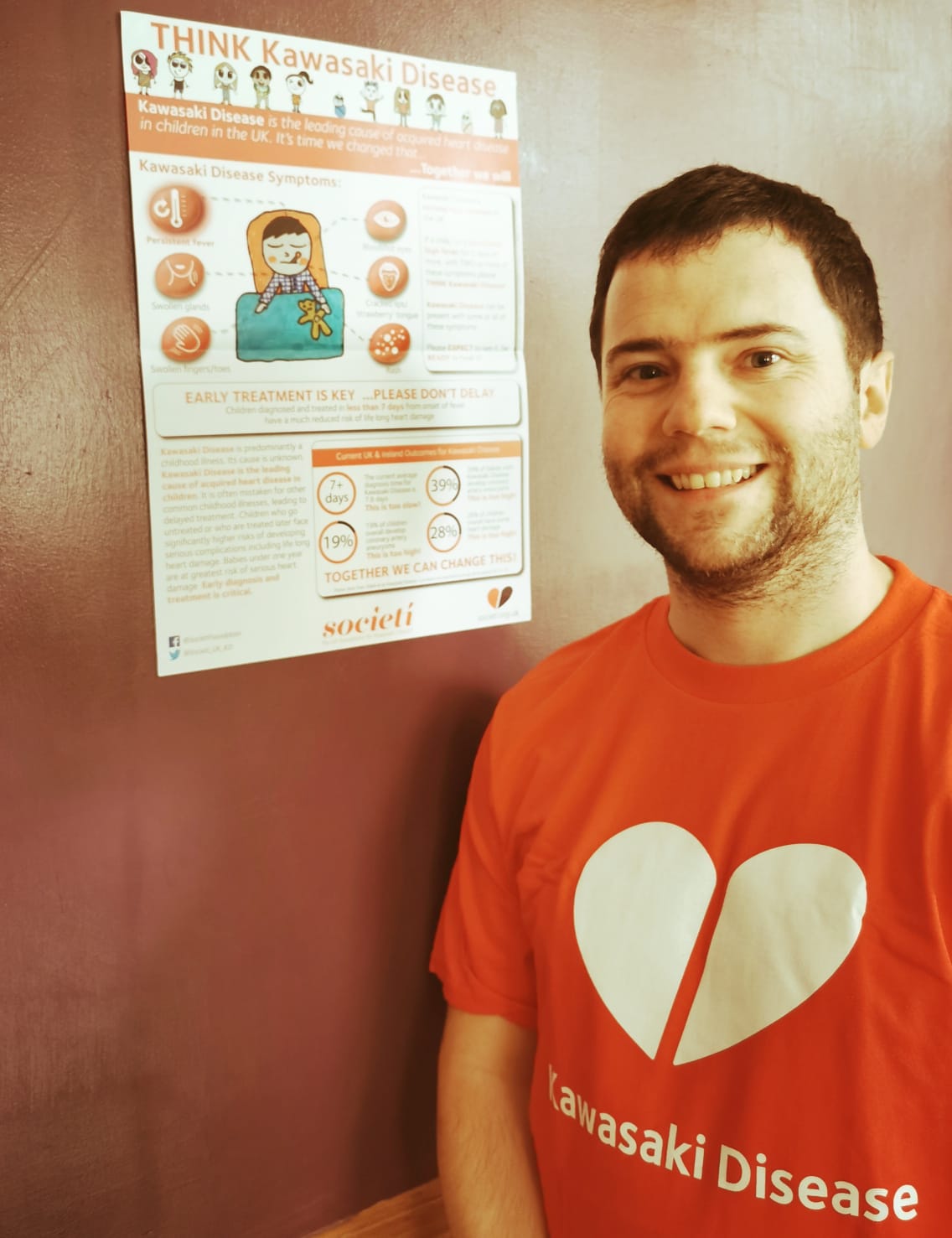 Back in 1985, being just a few months old, I was taken into hospital with an unexplained fever, a patchy red rash and peeling of my skin. According to what I’ve been told by my parents, the doctors were perplexed. About six months later, I was formally diagnosed with Kawasaki Disease.

As a child I remember spending hours in the cardiac outpatient department of Alder Hey hospital and the process of getting an ECG, an echo and then seeing the Doctor. Occasionally, as I got older I would also have an exercise tolerance test and on two occasions I had a coronary angiogram. I was 8 years old when I had my first angiogram and 12 when I had my second.

As a teenager I was quite naive and didn’t really know about how the disease had affected me. I was a happy, very active “normal” teenager – playing football competitively twice a week as well as any spare time in between.

As I got a bit older and I began to take more of an interest in the disease and my well-being. I learned that the disease had left me with quite a large aneurysm in my main coronary artery – this was a permanent aneurysm. I was told that we would know by the time I turned 21 (fully grown) whether or not I would need a procedure to fix the problem that the giant aneurysm was causing – likely a stent or worst case scenario, a bypass graft.

When I graduated from University I became a Cardiac Physiologist – an Echocardiographer and Pacemaker Technician basically! This was completely coincidental to me having the heart problem, believe it or not. I didn’t aim to have a job that would link to my own personal life so intimately. Honestly, I didn’t!

Towards the end of 2010, at the age of 26, my Consultant decided it would be a good idea to get an updated angiogram.   At this point I had no symptoms – playing sport twice a week and staying pretty healthy. However, as soon as the doctors had finished the angiogram they explained that the artery had become blocked

They went on to advise that although a stent may be able to fix the problem (a procedure similar to the angiogram in which a balloon is used to deploy a metal cage to open up the artery), it looked more likely that I would need a bypass graft to fix it.

Eventually a date was set and in June 2011 I was booked to have a coronary artery bypass graft (CABG) in Manchester Royal Infirmary. It was a weird time for me. I had a two month old daughter, I was busy in work and with study, and I was also caring for my mum who was ill at the time. I suppose this put the thoughts of my own health at the back of the pile.

At no point in the lead up to the surgery did it enter my mind that something could go wrong, or that I wouldn’t make it out. My wife finds it hard to believe that I didn’t think about the worst, but I didn’t. I can’t explain why but there you go. I suppose I just knew it wasn’t my time, and I’m usually a pessimist!

Anyway the procedure was performed and in fact I had two grafts during the operation, both taken from the internal mammary arteries, so no veins/arteries were taken from my legs or arms as is sometimes the case, and the procedure was a complete success. I then spent a fairly uneventful five days recovering in hospital before going home.

After just under 3 months off work, I returned and soon got back into the swing of things. My life returned to normal (albeit with the new baby!) and we were happy to announce that we would be having a second child in the following May.

I started running and was back to my normal level of health and fitness soon after. I now play sports regularly including football and I cycle as much as my busy schedule allows, aiming for 2-3 hours of vigorous exercise a week. Today, I watch my diet, monitor my exercise – I wear a fitbit and aim to walk 15000 steps a day, which I more often than not manage. These are lifestyle things I choose to do rather than specific advice I’ve been given – but looking after myself is important for myself and my family.

So, after almost 7 years since surgery I remain on 3 cardiac medications (Aspirin, Simvastatin and Losartan) and have regular follow ups with my Cardiologist. That’s my particular regime! I’m relatively fit and healthy and enjoy a completely normal life. Kawasaki Disease has been part of my life but I think it’s fair to say, it’s never been a main part!

I hope sharing my experience has given some insight into what it’s possible to achieve – which is actually a pretty normal life from my perspective – as well as the sorts of challenges which can be faced when living with the consequences of Kawasaki Disease.